It’s almost Thanksgiving here in Canada! I love this holiday (mostly because it seems to revolve entirely around food). But let’s be honest, Thanksgiving is a time of year that can be a little tricky for us vegan and vegetarian Ashtangi’s. Especially if you’re from a family of meat lovers like I am! The whole family gathers around a table to eat a giant turkey who’s butt has been stuffed with breadcrumbs and spices.

Wow… when I say that out loud it actually sounds really, really weird!

If your family is anything like mine, they really aren’t willing to give up their traditions. They want their turkey, butt-stuffing, and all the fixin’s. They aren’t down to have a totally vegan thanksgiving just for me. Over time I’ve realized, that’s ok.

I’ve learned that you can’t force a change in people. It doesn’t work. Forcing your ideas on people is probably the quickest, surest way to create resistance and opposition. And it reinforces the “crazy vegan” stereotype that everyone has in their heads.

So what’s a vegan Ashtangi to do?

Well, rather than kick up a huge fuss, I just bring my own delicious vegan food to our holiday dinners. I make enough so that my husband and I have enough to eat, and a little extra so people can try. Not to brag or anything, but people usually really, really like it! 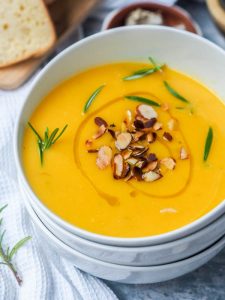 Soup is the perfect warming food for this time of year, but creamy pumpkin soup is even better! This soup from Avocado Pesto is delicious, nutritious and makes for a great Thanksgiving starter. 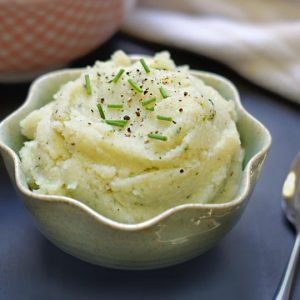 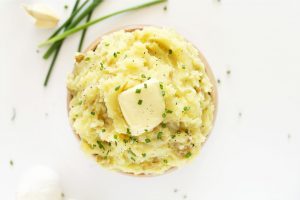 I figured I’d give you two recipes for mashed potatoes this Thanksgiving. One featuring good old-fashioned potatoes, and the other mashed cauliflower! Mashed cauliflower is a great alternative to mashed potatoes – it’s got a low glycemic index, a high micronutrient content, and won’t leave you feeling heavy and bloated as potatoes sometimes do. And as Ashtanga teacher and practitioner Jelena Vesic discovered recently, eating too many potatoes the night before second series makes it very difficult to lift up from karandavasana! 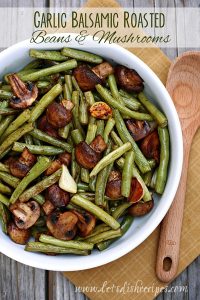 When I was a kid, I always remember there being green beans at Thanksgiving dinner. I didn’t appreciate them then, but they’re one of my favorite veggies now. This recipe from Let’s Dish Recipes would be a great addition to any Thanksgiving feast. 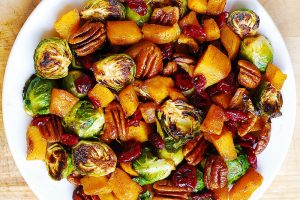 Maple syrup, cinnamon, butternut squash – need I say more? This delicious side dish filled with vegetables may as well be a dessert… but good for you! I love this recipe from Julias Album. 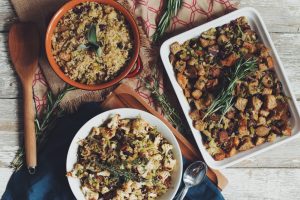 Stuffing is the quintessential holiday food. It was one of the things I was most sad to give up when I became vegan. But fear not! Hot For Food has three super delicious, simple stuffing recipes to get you through this Thanksgiving. It’s stuffing, without all the turkey butt! 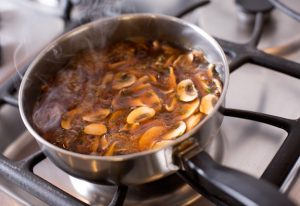 Let’s be real – Thanksgiving isn’t really Thanksgiving unless there’s gravy! I love this recipe from Veg Kitchen. It’s so simple and so delicious. There are tons of vegan gravy recipes out there, but this one is my favorite. 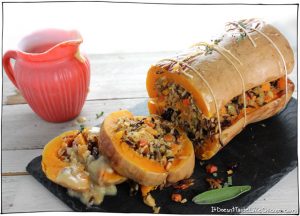 Butternut squash is one of my favorite fall foods, and almost always makes an appearance at Thanksgiving! I’ve made a variation of this recipe several times, and what’s awesome is that you can play around with the ingredients in the filling. You can add some extra veggies, use quinoa instead of rice – the vegetable world is your oyster. 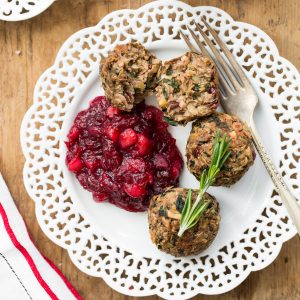 Recipe from Oh She Glows

I made this recipe from Oh She Glows the first Thanksgiving I was vegan. They were so easy to make, and tasted amazing! I made enough meatballs for myself, my husband, and plenty for my family to try. They were impressed that it wasn’t meat, and really enjoyed it! 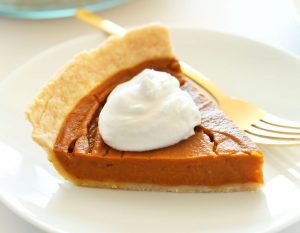 Nothing is better than a good old pumpkin pie, and this one from Minimalist Baker does not disappoint. With just a few ingredients and simple steps, this is one of my favorite pumpkin pie recipes. 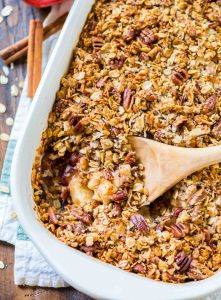 Last, but certainly, not least is Well Plated’s apple crumble. Apple crumble is like apple pie without the hassle of trying to make a perfect pie crust. Just chop up your apples, throw together the topping, and bake. This apple crumble is so simple, and so delicious!

Now, I know these recipes are delicious, and maybe you’re going to want to stuff yourself this Thanksgiving, but just so you know, we don’t take holidays off practice! AYCT is open Thanksgiving Monday from 8-12 for Mysore. David Robson will be there holding down the fort, encouraging your jump-backs, and personally checking your bandha’s. We’ll see you there!